My study focuses on Barbara Hepworth and the transition she made from carving to casting, a brave decision made at a critical moment in her career. It will examine her initial reluctance towards bronze and the reasons why in 1956 – middle-aged and mid-career – she felt compelled to make such a fundamental change in her working practices, after thirty years dedicated to direct carving and the doctrine of ‘truth to materials’. I am fascinated by the impact this decision had on her, her work and on her reputation at the time, and also how it has shaped more recent assessments of her as a pioneering woman sculptor.

Hepworth declared that she finally learned to love bronze in 1966, in a letter to her then ex-husband. Until that point, her relationship with the material had often been fraught with complications. By 1964, however, her use of bronze reached an apotheosis with ‘Single Form’. Commissioned by the U.N. for its Secretariat, ‘Single Form’ was the most important commission of Hepworth’s career, but as a public, abstract sculpture by a British woman sculptor for a prominent site in New York, its impact should, I feel, be better understood. Framed by the latent (and blatant) misogyny of the period and great shifts in a quickly growing art world, I will examine the bronzes Hepworth produced between 1956 and 1964 culminating with ‘Single Form’. I shall give particular focus to the experimental nature of Hepworth’s new working methods before she found a satisfactory synthesis of form, scale and material, until, one might say, she found a ‘new’ truth to a ‘new’ material. Many of these works receive little or no critical attention now. Likewise, Hepworth’s drawings and paintings – which were key in the development of her own ‘bronze age’ – are a neglected area of study, and offer great scope for my project.

Over the course of a twenty-year career as a curator, I have been responsible for more than one hundred exhibitions; first at the Henry Moore Institute, Leeds and then at the New Art Centre, Roche Court. I recently left my role as a Director of the New Art Centre in order to pursue this Ph.D., having curated several exhibitions of Hepworth’s work there, including: Barbara Hepworth: a celebration of The Hepworth Wakefield (2011); and Barbara Hepworth: Form and Theatre (2015). The New Art Centre represents the Hepworth Estate, and I also helped place Hepworth’s sculpture and paintings in a number of private and public collections including ‘Single Form (Eikon)’ at The Metropolitan Museum, New York. 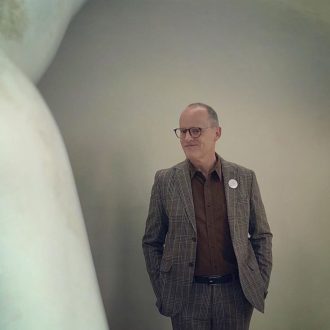