My thesis is a study of masculinity as articulated in the visual culture of Qajar era Iran (1779-1925).

The material evidence ranges from monumental paintings destined for niches on the walls of royal palaces and elite mansions, to lacquer-painted playing cards and penboxes, and from murals in Sufi lodges and coffee houses to lithographed books of Shi`ite narratives and classical Persian poetry.

With the exception of the occasional female dancer or concubine, the subject of these diverse mediums of Qajar visual culture in both public and private realms was that of the male figure. Be it the folk heroes of Shi’ite martyrology, the king and his progeny or even the ‘everyman’, images of Qajar masculinities circulated within spaces of male sociability. Given the mostly public visibility and viewing practices of such images by men, the collective effect of this material allows us to trace the use of male gendered imagery as an emblematic and ideological motif in Qajar culture. Representations of the male body, my study will argue, communicated cultural attitudes towards masculine identity and nationhood as Iran entered what has been referred to as the global moment of modernity in the nineteenth century. Iran during ‘the long Qajar century’ was subject to emergent colonial ventures from European superpowers including Britain, France and Russia. In that light, the Qajar masculine image was uniquely interwoven with emergent issues of nationhood in the tense negotiations between the global and the local, and their implications for the conception of ‘the idea of Iran’ as a country conscious of its own image and antiquity.

This project will be the first art historical consideration of Iranian masculine image during the nineteenth century and the first to investigate the reliable function of Qajar art as a social document. 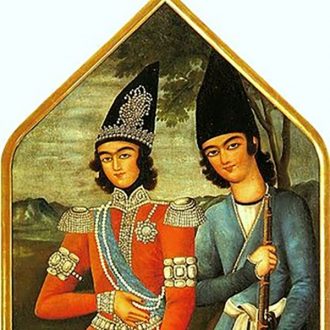