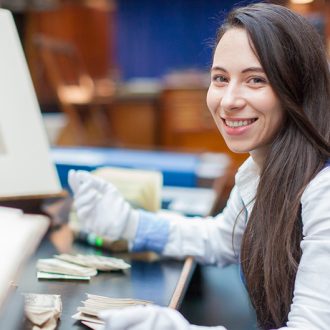 I recently completed an AHRC-funded collaborative doctoral project, undertaken between The Courtauld Institute of Art and The Prints and Drawings Department of The British Museum. Entitled ‘Prints in Play’ its aim was to focus new attention on a rare body of early modern prints that were used in daily life. Taking my lead from the significant holdings of printed games at The British Museum, my thesis considered why games (which are typically seen as marginal or novelty objects in modern collections) were the site of such invention in early modern print.

My current research, developed from my doctoral thesis, continues to explore the use of play as a creative practice by early modern artists such as the ‘playful’ Bolognese painter, sculptor and printmaker Giuseppe Maria Mitelli (1634-1718). I am working on several publications developed from my doctoral research including essays and articles about Mitelli, the playing-cards of Stefano della Bella and Jean Desmarets, the geographic games of Pierre Duval and the political playing-cards of Francis Barlow. Geographically, my research covers early modern France, Italy, England and the Netherlands.

The course I am teaching on portraiture this year at The Courtauld reflects my ongoing interest in the fashioning of social identity, which has been central to my research on games. Outside of my work on play and games, portraiture is also one of my key ongoing interests. Whilst studying at The Courtauld, I have given papers about the portraiture of Queen Catherine of Braganza at Bangor University and the V&A as well as curating a display of drawings at The Courtauld Gallery presenting the English portrait artist Sir Peter Lely (1618-1680) as a draughtsman and collector of works on paper.