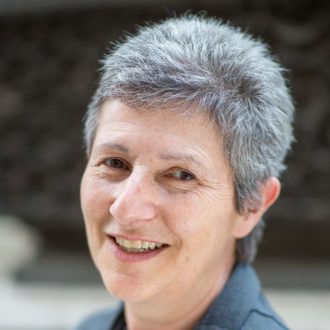 Joanna Cannon studied as an undergraduate and postgraduate at The Courtauld Institute of Art, receiving her PhD in 1980. She has taught at The Courtauld since 1977.  She was appointed Professor in the History of Art in 2014.  Joanna  was the Head of the Classical, Byzantine and Medieval Section of The Courtauld from 2004-2008, and Head of Examinations from 2012-2014.

Joanna’s research interests centre on the art and architecture of Italy in the thirteenth and fourteenth centuries with particular interest in: evaluating the visual as a historical source; assessing the impact of historical circumstances on the formal development of art; investigating methods of explaining and disseminating information concerning the physical characteristics of works of art gathered through technical analysis. Her research has resulted in many publications, most recently the monograph Religious Poverty, Visual Riches, New Haven, Connecticut and London 2013. She is currently developing a proposal, with Caroline Campbell (Curator of Italian Paintings before 1500 at the National Gallery, London) for an exhibition presenting Sienese Art of the thirteenth and fourteenth centuries in British collections.

Joanna is convenor of the seminar group Giotto’s Circle. She is a trustee of the Caroline Villers Research Fellowship, which promotes research in the field of Technical Art History. Together with Aviva Burnstock and Caroline Campbell she directed the project funded by the Andrew W. Mellon Foundation to create a research-based website, investigating technical aspects of the works of the Master of the Fogg Pietà/ Maestro di Figline across international collections. Professor Cannon is local organiser of the annual lecture ‘ICMA at The Courtauld’, and was co-organiser of the workshop and website Art, Architecture and the Indulgence for The Courtauld Research Forum.