Tom is a historian of Film and Media art after 1960. His interdisciplinary research is concerned with intersections of art, cinema, and new media in the postwar period with a particular focus on the role of cinema and television in the global Pop art movement; the history of TV art; and the New York Downtown Avant-Garde of the 1970s and 1980s. He is also interested in the intersection of art and politics, in particular how politics is manifested and thought through in art practice in relation to urban history, sexuality and spatial politics.

Tom was educated at the University of Sussex and the University of Edinburgh where, after completing his PhD, he was a Teaching Fellow at the Edinburgh College of Art. He organised courses on the history of film and media and oversaw all final year dissertations in the School of Design and Screen Cultures. He previously has held a Postdoctoral Fellowship at the Paul Mellon Centre for Studies in British Art/Yale Center for British Art where he worked on a project titled ‘Making it Function Differently: TV Sculpture’ which looks at a variety of artists from the 1960s and 1970s who employed television monitors as elements in radical sculptural assemblages. He was the 2020-2021 Terra Foundation Postdoctoral Fellow at the Centre for American Art at the Courtauld.

He is currently writing a monograph on the influence of television in the New York Downtown scene of the 1970s and 1980s. The book explores artists who used television as both an apparatus and subject matter to analyse timely points of  political, racial and gendered contestation in relation to the mass media; urban spatial politics; American identity; and history. Artists examined in the project include Jean-Michel Basquiat, Gretchen Bender, Keith Haring, Ann Magnuson and Tom Rubnitz. The book argues that television acted for these artists as a ‘political imaginary’, a symbolic space that questions how we know the political and how the political is made legible through technologies of image making

Tom regularly teaches public courses for the Courtauld on American art. Most recently he has led courses on Californian art after 1945 and on the New York Downtown Avant-Garde and will offer a Summer School course on Pop art in 2021. 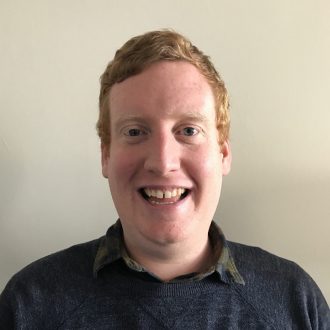