Ladakh, in the Western Himalayas, has been and remains a significant centre of Tibetan Buddhism. This region of India is marked by numerous Buddhist monasteries, temples and chortens, many of which are adorned with stunning wall paintings. The development of Tibetan Buddhism in the region is ascribed to the tenth to twelfth century CE following the ‘second propagation’ of Buddhism in Tibet. Manuscripts, sculptures and wall paintings flourished under the patronage of western Tibetan kingdom and that of Lotsawa  Rinchen Zangpo (958-1056), the ‘Great Translator’ of Sanskrit Buddhist texts. Rinchen Zangpo inspired the  foundation of several temples and monasteries across Ladakh during his lifetime and is also credited for bringing in artists from neighbouring Kashmir, thus infusing a new artistic tradition inspired by contemporaneous Kashmiri art, a characteristic of the ‘early period’ temples through the eleventh to early thirteenth century.

Recent publications on early period Buddhist wall paintings in Ladakh focus mainly on iconography, style and other art historical matters, but painting materials and technologies remain virtually unstudied. Many wall painting conservation projects are currently ongoing in Ladakh. Knowledge of original materials is one of the cornerstones of conservation and while great efforts have been made to allocate resources to such investigations the paucity of technical data on early Buddhist wall paintings in Ladakh is largely unaddressed. Such lack of knowledge seriously hampers the understanding of deterioration mechanisms and the assessment of the suitability of conservation approaches and materials.

It is hence proposed to carry out a systematic study of ‘early period’ wall paintings executed between eleventh and early thirteenth century in the Ladakh region. The aim is to identify their materials and technology from their support to earthen-based plaster layers, to paint layers and final glazes, and to shed light on similarities, developments and differences throughout the period studied. The proposed research seeks to apply scientific methods to contribute to a better understanding of the technique and variation in technique of wall paintings and to begin to better understand their inherent susceptibility to deterioration and implications in terms of conservation issues and approaches.

Major sites in Ladakh being focused in the current research include temples at Nyarma (near Thikse), Zangla (Malakartse Chorten), Tragkhung Kowache, Mangyu, Sumda Chun, Sumda Chenmo, Skiu and Alchi. Extensive studies are being carried out on all these sites, some of which are difficult to access and not well known. Investigations at some sites led to the discovery of paint layers that were concealed and never documented. Sophisticated instrumental analysis carried out on selected samples revealed valuable information that will add on to the history of painting in the region. 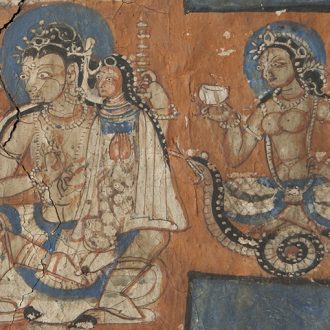