Lindy Grant was appointed as Professor of Medieval History at the University of Reading in 2006. In September 2016, she will retire and become Professor Emerita. Before moving to Reading, she was a medieval curator in the Conway Library at the Courtauld Institute. Her research focuses on the intersection of politics, religion and culture, especially material culture, in Capetian France and the Anglo-Norman/Angevin sphere. She is the author of Abbot Suger of Saint-Denis: Church and State in Early Twelfth-Century France (Longmans, 1998), Architecture and Society in Normandy 1120-1270 (Yale University Press, 2005) and Blanche of Castile, Queen of France, (Yale University Press, 2016). She was President of the British Archaeological Association, 2010-2013, and is now a Lifetime Vice-President. She is a Trustee of the British Academy Angevin Acta project, and is currently Chair of the R.Allen Brown Trust for Anglo-Norman Studies (Battle Conference). She advised English Heritage on their conservation and interpretation of Dover Castle keep, and was a member of the Comité Scientifique for the Centre de compréhension de l’Europe du Moyen Age (Tapisserie de Bayeux) from 2012-2018. She has done media work for both British and French TV (including programmes on Dover Castle, The Westminster Abbey Great Pavement, Le Mont Saint Michel, Eleanor of Aquitaine, and Blanche of Castile), and took part in the In our Time programme on Eleanor of Aquitaine. 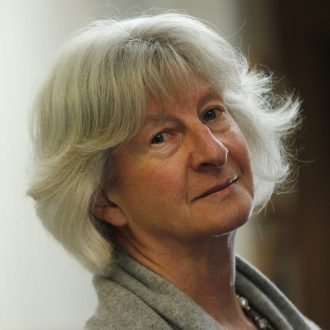