Natalia Murray was born in St. Petersburg where she gained BA and MA in Art History at the Academy of Fine Arts before taking the PhD course at the Hermitage Museum (conducting research on the XVII century Dutch paintings and British reproductive mezzotint engravings of XVII-XIX centuries, and their influence on the development of artistic tastes in Britain).
In 2015 she has been awarded PhD at the Courtauld Institute of Art.
At present she works as an independent curator and an associate lecturer at the Courtauld Institute of Art where she teaches MA course on the role of the exhibitions and private collections in Europe in 1863-1930. In 2017 she curated a major exhibition Revolution. Russian Art. 1917-1932 at the Royal Academy of Arts in London. She is currently working on several exhibition projects in Columbus (Ohio), London, Moscow and Paris. Her latest exhibition The World as Objectlessness. The Birth of a New Art which traces development of the avant-garde in Vitebsk from Chagall to Malevich, was opened with high acclaim at the Jewish Museum in Moscow in October 2022.
Her most recent books include “Two Women Patrons of the Russian Avant-Garde. Nadezhda Dobychina and Klavdia Mikhailova” (Unicorn, 2021) and “Art for the Workers. Proletarian Art and Festive Decorations of Petrograd. 1917-1920” (Brill, 2018). In November 2018 the Russian translation of her 2012 book “The Unsung Hero of the Russian Avant-Garde. The Life and Times of Nikolay Punin” was published by Slovo in Moscow.

Her books and articles extend across the wide field of 19-20 century Russian and European art, and she has featured in films dedicated to the Hermitage Museum and the Russian revolution and in programmes for BBC Radio 4 and the BBC World Service. Natalia is also a trustee of The Avant-Garde Art Research Project – a UK-based charity which shares one of her aspirations to encourage and advance the wider understanding of the avant-garde art and to reduce the number of fakes on the art market. 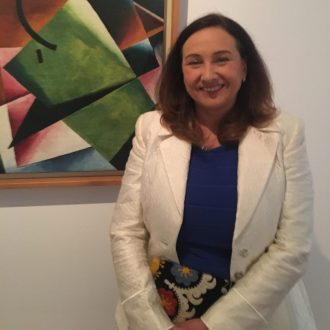