Thesis: ‘in signum viduitatis et humilitatis‘: European Queens and the Spaces, Art and Inhabitants of their Clarissan Foundations, ca. 1250-1350

The fourteenth-century Clarissan foundations of Santa Maria Donna Regina in Naples (Italy), Santa Maria de Pedralbes in Barcelona (Spain), Santa Clara e Isabel in Coimbra (Portugal) and Königsfelden (Switzerland) were built as burial sites for, or at the initiative of dowager queens. Not only were these monasteries erected in the most fashionable Gothic styles of their time, they also were decorated with extensive cycles of wall paintings and stained glass, and furnished with precious altarpieces and other valuable artefacts. Although the importance of each of these foundations in regard to both female royal patronage and the visual culture of female monasticism is increasingly recognised, no attempt has previously been made to study them as a group and as part of a broader, pan-European phenomenon. My thesis seeks to fill precisely this research gap: by taking a new comparative approach in investigating these monasteries, their spaces and artworks, I aim for a better understanding of late medieval patronage by royal women in a specific Franciscan context. 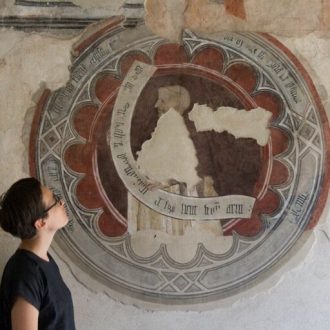