Thesis: Connections in the Making and Meaning of the Art of Bhutan and Tibet in the 17th and 18th Centuries: a Study of the Wall Paintings at Tango Monastery

The Kingdom of Bhutan retains an exceptional heritage of Buddhist wall paintings, dating from the early 16th century CE to the present. The art of the country remains largely unknown both within and outside Bhutan, due in part to the lack of an indigenous tradition of art-historical study, but also to the paintings’ inaccessibility. The Courtauld has been working in Bhutan since 2008 to conserve and raise awareness about this important cultural heritage that is under threat by natural disasters and modern renovations.

Only a few schemes from the 17th and 18th centuries survive, though this is one of the most important periods for painting when skilled Tibetan and Nepali artists came to Bhutan. It is also the time of significant geo-political changes with state consolidation and widespread renovation of religious estates under the 4th Desi, Tenzin Ragbye. Among these, the wall paintings of Tango Monastery are some of the most important demonstrating exceptional craftsmanship and lavish materials, while depicting Buddhist themes with important historical figures from the region. With their connection to Tibetan painting traditions and the Drukpa Lineage in Tibet, the paintings in Tango monastery provide the ideal basis for exploring the connections between Bhutanese and Tibetan art, which has hitherto been largely unstudied.

The paintings at Tango are undoubtedly significant; they are also visually arresting and technically complex. However, the paintings have not been fully documented, nor has their subject matter been fully identified. Precise dating of most of the schemes also remains unclear. My research aims to provide a comprehensive analysis of their iconography and style, define the different phases of painting and their development, and explore how they reflect the political and spiritual concerns of Tenzin Rabgye and his immediate successors. By studying the paintings of Tango in relation to other coeval Tibetan-influenced paintings in Bhutan, and by exploring their relations in Tibet, I aim to throw new light on Bhutanese wall painting to aid its understanding, interpretation and preservation.

The current PhD research builds on the ‘making’ aspect of the Tango paintings, as well as considering aspects of their ‘meaning’ – not only within the context of Tango Monastery, but in terms of their historical, religious and artistic significance. Primary Tibetan and Bhutanese texts are being consulted and translated, and brought together with investigations into original technology of relevant paintings in Bhutan and Tibet with non-invasive methods (multispectral imaging) and scientific analysis. 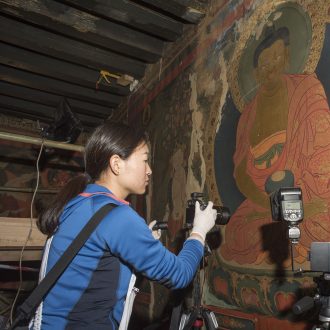