Karen Serres received her training in art history and museum studies at the Ecole du Louvre (1997) and the Sorbonne (1998) in Paris. She completed her MA (1999) and PhD (2004) at The Courtauld, where her research focused on French and Italian Baroque painting.

She was then appointed Andrew W. Mellon Postdoctoral Fellow at the National Gallery of Art in Washington DC, working on French and Italian painting and sculpture. She later became the Robert H. Smith Research Curator in the Sculpture Department of that institution. In 2009, she was named the Nina and Lee Griggs Associate Curator of European Art at the Yale University Art Gallery in New Haven, Connecticut. She returned to the Courtauld as Schroder Foundation Curator of Paintings in September 2012.

Current and recent exhibitions and projects

For the past three years, Karen has been involved in the Courtauld Connects project. One of its facets is to ensure that the collection of The Courtauld remains accessible during the closure of the Gallery for refurbishment (autumn 2018 to autumn 2021). As such, she co-curated the exhibitions The Courtauld Collection, A Vision for Impressionism at the Fondation Louis Vuitton in Paris (2019) and Masterpieces of Impressionism. The Courtauld Collection (three venues in Japan, 2019-20). These projects, as well as the Courtauld National scheme that shares the collection with partner museums across the UK, drew on new research on the collector and philanthropist Samuel Courtauld, as well as on the works of art themselves.

Prior to the Gallery’s closure for refurbishment, she curated the exhibitions Soutine’s Portraits: Waiters, Cooks and Bellhops (2017-18); Bruegel in Black and White. Three Grisailles Reunited (2016); Bridget Riley. Learning from Seurat (2015-16); Unfinished… Works from The Courtauld Collection (2015) and Collecting Gauguin. Samuel Courtauld in the ‘20s (2013).

The Courtauld’s collection of paintings before 1900 is the object of an ongoing, long-term research project, with the aim of producing an online scholarly catalogue. 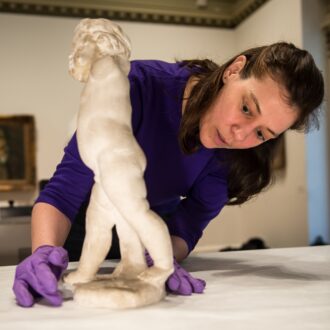