Thesis: Nādir Shāh: The Emergence of Royal Portraiture and a New Body Politic in Eighteenth-Century Iran

In a little over a decade, Nādir Shāh (r.1736-47) ousted the last remaining Safavids, founded the Afsharid dynasty (1736-96), and became the fiercest conqueror of his time, with an empire stretching from the Caucasus to India. His image is captured in diverse representations, including the earliest extant corpus of single portraits of an Iranian ruler. Yet, they have never been studied as a phenomenon that ushered in the new genre of royal portraiture in Iran. Individual depictions of kings were virtually absent in the Safavid period (1501-1722) despite the popularity of portraiture, and kingship was represented as a ruling institution. My primary inquiry traces how, and why, the royal image was reinvented from the corporate to the corporeal under Nādir, while maintaining dialogic relationships with the Safavid past and the Zand (1751-94) and Qajar (1785-1925) future. Theories of the body politic, never before applied in Persian painting, provide a methodological tool to contrast the divergent displays of power and underlying ideologies.

Employing the royal body as the thematic backbone of a three-part analysis, this study investigates, first, Nādir’s single-figure depictions and the fashioning of his body into a world conqueror endowed with farr (divine glory) and a national saviour of Īrān-zamīn (Land of Iran); second, the foregrounding of the royal self in his group compositions; and third, his Indian portraits, specifically how and why the body of an Iranian ruler is translated into the local vocabularies and inserted into the Mughal pictorial genealogy and the British colonial narrative.

The thesis concludes with a consideration of how the image of Nādir traversed both empires and epochs. All his paintings were made after the conquest of India in 1739, an event that propelled him onto the world stage. His emergent body in painting needs to be framed against the rhetoric of empire and his claim of universal sovereignty as the shāhanshāh (king of kings). His painters drew from the visual languages of Iran, India, and Europe to devise a polyglot image that crosses cultural and religious boundaries. Their creations gave rise to a new body of the shah, one that served as a model for portraits of Zand and Qajar rulers. Through this focussed study of royal portraiture, I aim to put forward new ways of seeing representations of Iranian kings and kingship, and to attend to the neglected eighteenth century in Persian painting. 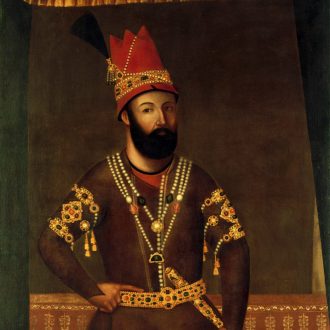