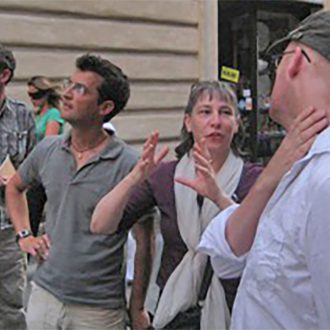 Georgia Clarke read Classics at Cambridge and was involved in archaeological projects in Tours, Pompeii, and Rome. She did her Ph.D. on Renaissance architecture at The Courtauld Institute of Art. She taught at The Courtauld from 1993 to 2014; she retired from the Courtauld and became Reader Emerita in Autumn 2014. She continues to pursue her own academic research but no longer teaches.

She also taught for the Open University, at Cambridge University, at UEA, and at the Architectural Association in London. She has held a number of fellowships, including a Rome Scholarship in Italian Studies at The British School at Rome, in 1987-88, a Charter Fellowship in History of Art at Wolfson College, Oxford, in 1992-93, and in 1999-2000 was Deborah Loeb Brice Fellow at Villa I Tatti, The Harvard University Center for Italian Renaissance Studies, Florence.

Her book, Roman House – Renaissance Palaces. Inventing Antiquity in Fifteenth-Century Italy (Cambridge University Press, 2003), received the Alice Davis Hitchcock Medallion from the Society of Architectural Historians of Great Britain in 2005, as well as Honourable Mentions by the Renaissance Society of America for the Phyllis Goodhart Gordan Prize, and by the Fondazione Salimbeni per le Arti Figurative for the 22nd ‘Salimbeni Prize for Art History and Critics’.

She was co-investigator, with Dr (now Professor) Fabrizio Nevola, of an AHRC-funded ‘Beyond Text’ Research Network (2008-11) entitled ‘Street life and street culture: between Early Modern Europe and the present’ . This project involved art historians, architectural historians and theoreticians, planners, public officials, artists and critics, film-makers, a sound artist and an actor, to create an interdisciplinary, international community drawn from the UK, Europe, and the USA. The Network considered how streets shaped and informed the daily lives of urban communities in the past, and how this historical experience relates to contemporary realities.