Ben Pollitt specialises in art and the former British empire. He received an MA (Hons) in English Literature from the University of Edinburgh, an MA (Distinction) in History of Art from Birkbeck College, University of London, and a PhD from UCL (2020), where he also worked as a Teaching Fellow. Prior to entering academia, Ben worked for many years as a teacher and examiner of  A-Level History of Art. His research has been published in leading academic journals, including The Art Bulletin and Third Text for which he also serves as a co-editor of the ‘Decolonial Imaginaire’ forum. 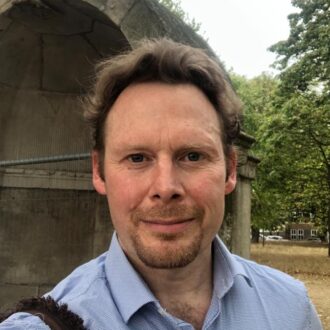 The Atlas Unbound: John Webber, James Cook, and the End of Sympathy (under review)

‘The Little Blue and the Big: Colour, Colonialism, and the Weather in Naiza Khan’s Hundreds of Birds Killed’ (in preparation)

‘The Incendiary Image: Fire and the Archive in William Westall’s Views of Australia’ (under review)

‘The Cost of Sympathy: Towards a Visual Economics of John Webber’s Atlas,’ Object: Graduate Research and Reviews in the History of Art and Visual Culture 19 (2017): 55–76

‘Between Westall’s Chaos and Humboldt’s Cosmos: Picturing the Weather in 1848,’ in ‘British Art and Natural Forces: A State of the Field Research Programme,’ November 2020, Paul Mellon Centre for Studies in British Art, London

‘Troubled Screenings: Landscape Views from James Cook’s Last Voyage and the Right to Look,’ in ‘Past Imperfect: Landscape and Confinement,’ January 2019, UCL, London

‘Lost and Forgotten: The Story of the First Cook Monument,’ in ‘Memory and Exploration Conference,’ September 2018, National Maritime Museum, London

‘Meetings on the Beach: the Art of John Webber,’ in ‘Art on the Move: A Conference on Mobility in the Long Nineteenth Century,’ January 2018, Barber Institute of Fine Arts, University of Birmingham, Birmingham