Thesis: ‘San Quirce de Burgos: Piety and Patrimony in the Long Life of a Romanesque Church’

European Research Council Starting Grant No. 263036, Reassessing the Roles of Women as ‘Makers’ of Medieval Art and Architecture, Predoctoral Fellow

The rural monastic church of San Quirce in the Spanish province of Burgos (Castilla y León) is recognized by scholars, if only briefly treated, for its role in the development of Romanesque sculpture in Iberia. The church survives today as a little known but exquisitely decorated building that was documented as a college of canons under the cathedral of Burgos in 1147. It remained as such until its possessions were dissolved by the Spanish government in 1834. Having been in private hands since that time, the Romanesque church is now located within a private hunting reserve and has never been the subject of a monographic study. This study treats not only its heyday in the first half of the twelfth century, but also the site’s changes and development over time.

The history of San Quirce reveals links to Castile’s formative period during the tenth century and to the powerful nearby monasteries of Santo Domingo de Silos and San Pedro de Arlanza, in addition to the cathedral of Oca and, after 1075, that of Burgos. Meanwhile, the existing church’s architectural features and high-quality, enigmatic sculptural program bear evidence of shared trends and aesthetics with the better-known Romanesque churches along the pilgrimage road to Santiago de Compostela. Likewise, it is San Quirce’s built environment that provides the most compelling insights into its past. Careful analysis of the single-nave Romanesque church’s masonry, masons’ marks, and sculpture (dating variously between the late eleventh to mid-twelfth century) reveals frequent and meaningful changes in concept, unusual for such a small building. A series of pauses in construction transformed San Quirce from what had likely begun as a simple, single-cell church to one with an ambitiously innovative domed crossing, possibly the earliest of its kind in Burgos. 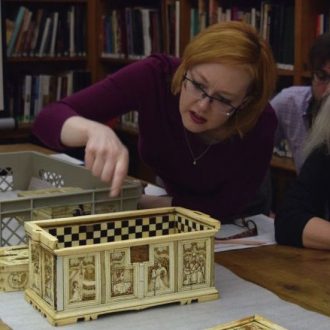 Email Reassessing the Roles of Women as 'Makers' of Medieval Art and Architecture Academica.edu