Thesis – ‘pro æterna salute dominæ ducissæ’: The Carthusian Patronage of Isabella of Portugal and Margaret of York, Duchesses of Burgundy, 1430-1503

The Carthusian Order was respected throughout the Middle Ages for the austerity of the monks’ solitary lives and for their faithfulness to their founding principles. The Order had numerous restrictions and limitations on visitors to their monasteries but were especially strict on women who were forbidden from entering charterhouses. In 1506, a Papal Bull reiterated this ban, indicating a widespread contravention of these regulations. Indeed, from the late fourteenth-century, women appear to have regularly engaged with the Carthusian Order as generous patrons, as well as gaining access to their monasteries. This thesis will investigate the extensive gifts, foundations and donations made by high-ranking women to the Carthusian Order during this period. Focusing on the duchesses of Burgundy, in particular Isabella of Portugal and Margaret of York, it will look at the types of objects and gifts women gave to charterhouses, their presence (physically or visually, in life or in death) within these spaces, the reasons for their patronage and the ways in which they were able to articulate their own positions in society through these pious acts. 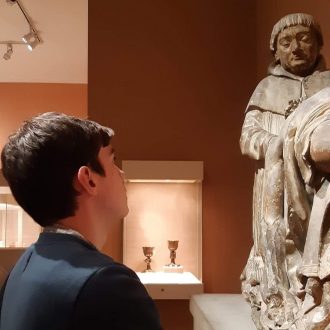