Thesis: Weimar in Black and White: the woodcut in the work of Ernst Barlach and Lyonel Feininger in Germany, 1918-1927

This thesis addresses the prominent attention paid to the art of woodcut during the early years of the Weimar Republic in Germany. Afforded ‘monumental’ status by critics and art historians of the era, the stark pictorial economy of this art form was hailed as the prime conduit for the prevailing spirit of the age. The study represents a comprehensive introduction to the woodcut oeuvres of Ernst Barlach (1870-1938) and Lyonel Feininger (1881-1956): both established artists who took up this uncompromising medium with equal intensity at the close of the First World War. On the basis of a comparison of diverse practices, the broader aim is to investigate why the woodcut should be perceived as uniquely suited to the artistic intentions of precarious times.

Contending that perception itself provides a key to the exaggerated response, the thesis explores the explicit visual scaffold of the artworks against a history of the psychology of vision and developments in neuroarthistory. With a particular focus on principles of visual order advanced by the Gestalt scientists operating during the same era in Berlin, it asks how and what contemporaries might have seen when laying claims to visible truths of the metaphysical kind. The purpose behind a close analysis of art works and the historiography is to attempt to bracket out persuasive associations with cultural identity and moral integrity in order to assess the perceptual conditions of an art form marked by a striking symmetry of means to expression. On this basis, the thesis argues that beneath conceptual claims to the expression of a Zeitgeist one should consider the embodied workings of a Zeitauge alert to salient contrast and decisive pictorial rhythm. Pointing to productive gains for artist and viewer alike, conclusions on the woodcut’s vital importance to the common constitution offer an interpretation that seeks to loosen a history often weighed down by its problematic discourse of spiritual authenticity. 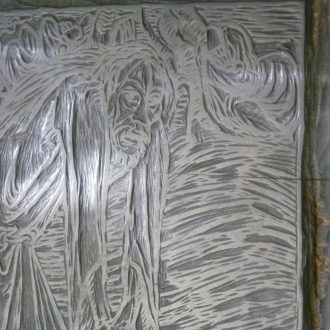