Funded by Michael Heller and The Joseph & Esther Lichtenstein Scholarship

Having completed my Undergraduate and MA at the Courtauld, I pursued my PhD with Professor Julian Stallabrass focusing on contemporary Cuban art.

My thesis explores the Bienal de la Habana through a contemporary art historical study. This is a major bi/triennial event, which focuses on “Third World” art. My research looks at the rise of the collateral exhibitions around the Bienal de la Habana, while analysing the way in which the Bienal de la Habana interacts and responds to the city and its inhabitants. This then furthers my understanding of how the uninvited Cuban artists were integrated into the Biennial. The thesis analyses the relationship between the invited and uninvited participants, placing this into a wider discussion of how the local fits into the global. This will be done through a comparative study of biennial discourse and mainstream media’s coverage of both groups of participants. My focus on a “Third World” art event has encouraged me to explore art from Africa, Asia and Latin America.

More recently I have been researching the role of British Black and Asian artists in the Bienal de la Habana, which led me to explore the history of British Diaspora artists in Britain. As a result, that led to me forming part of the founding team of the 1989 Collective which works closely with the Panchayat Special Collection at the Tate. Through conferences and publications, the group aims to explore the art history of British Diaspora artists from 1989 onwards. 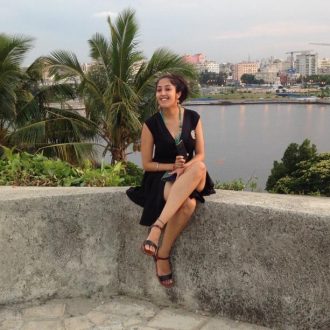