Emily’s research centres on the relationship between visual culture and European expansion in the world through the growth of trading networks and territorial settlements, c.1550 to c.1800. At the same time as investigating historical processes and production, she is concerned with postcolonial/decolonial approaches and attitudes to empire’s material legacy.

Emily studied art history as an undergraduate at the Courtauld Institute of Art, where she also completed her MA (2003) and PhD (2015). She has taught and supervised courses on European art and architecture from 1550 to 1850 at the Courtauld, the University of Cambridge and the University of York, and has also worked as an editor for national newspapers and magazines. Before returning to the Courtauld to teach in September 2017, she was a Leverhulme-funded Research Associate with the Centre for the Political Economies of International Commerce at the University of Kent. There she expanded her doctoral research on the architectural enterprises of overseas trading corporations in the globalising early modern world, connecting the construction projects of the English East India Company in Asia to those undertaken by the Virginia, Bermuda, Royal African and other companies.

Major themes in Emily’s current work include the significance of mapping and building in making claims over land and commerce; the representation of architecture in image and word; and the relationship between land and sea in early-modern experience. With a specialism in the emerging English/British empire, her research takes a ‘connected’, comparative approach that engages with the broader context of inter-imperial competition and conflict, as well as cross-cultural encounters and exchange. Her research to date has involved archival and field work in the Caribbean, North America, West Africa and India as well as Europe, and collaborative work with archaeologists and historians approaching the subject from other disciplinary perspectives. 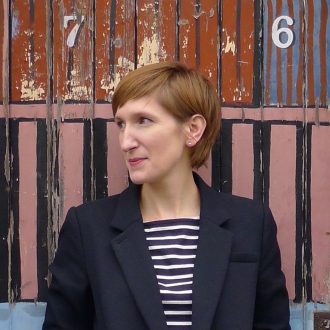